Do Not Outsource To India Until You Read This First 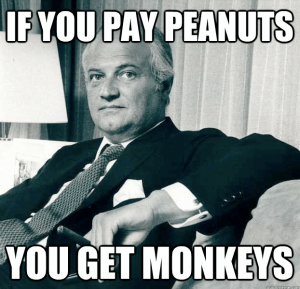 I get phone calls and emails almost daily from companies in India offering web and SEO services but business owners need to recognize that expecting quality work from these spammers is as likely as getting your money from the Prince of Nigeria.

Outsourcing just sounds amazing. When I first found out that I could hire freelancers online I got excited as I thought I could easily manage multiple projects while freelancers in other countries would do the work for a fraction of the cost. Hiring freelancers proved to be a bad idea time and time again.

If you’re a startup or non-coding entrepreneur looking to hire a web developer or computer programmer this is especially a bad idea. Aside from the fact that you’ll probably expect huge delays due to communication being lost in translation, if they sense someone is not technical then prepare to get taken for a ride as you’ll get inflated timelines and prices.

The quality of work you can expect is below mediocre. Most freelancers are just looking to get the job done as quickly as possible so they can collect their money and move on to the next project. There is no pride in their work.

I’ve outsourced to India numerous times through Odesk which has now become Upwork. The idea of Upwork is great. This website connects developers, designers, content writers, data entry and other admin personal from all over the world with those looking to hire online for a fraction of what they would typically pay. Unfortunately these sites are a haven for hacks.

In many cases I’ve spoken to freelancers using US, Australia, England Canada as their base location to give them credibility but eventually found out they were in India.

Data Entry – For an ecommerce website that had roughly 1000 products I put together very detailed instructions in a word document along with an excel spreadsheet of the products to be added. They were to research the products and come up with unique descriptions. The end result – not all products were added, in fact they skipped most products thinking I wouldn’t find out. The quality of work so poor and also included wrong images, poorly formatted descriptions, scraped images and descriptions and so on. I ended up doing the work myself in the end.

Programming. I had a custom checkout designed. After about 10 different failed attempts by hiring programmers in India and Ukraine I ended up doing the work myself. In some projects they made code changes to WordPress core files which means that if you updated your WordPress software the changes would be overwritten and no longer exist. In the end I did the work myself.

Graphic & Web Design. Thankfully I never actually paid anyone for this. I thought it would be a great idea to give freelancers a small test and ask them to create 1 banner for a product I chose. The quality of work was atrocious. Freelancers would first try to entice me with work they clearly didn’t do. When they submitted the sample banners to me it looked like they were made in Microsoft Paint. In the end I created them myself.

If you are going to hire someone from a freelancer website here are some tips I would recommend:

While outsourcing sounds like a great idea for startups who have limited budgets, I strongly recommend hiring local companies or freelancers. You’re likely to get better quality work, meet deadlines, avoid blunders, help your own economy and likely achieve greater success for your business.